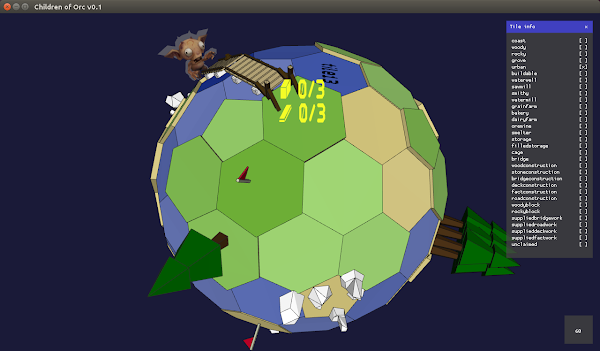 I have just introduced my new game to the world. It is called Children of Orc.

Children of Orc is a real-time third-person strategy game that is set on a procedurally generated hex-planet. Check out the trailer video:

To get published on Steam, it can use a little help with green light votes.

There are many nooks and crannies in Blender that can catch you off guard. Here I will document them for reference by my future self, lest I would forget.

By default, Blender uses CPU, to use GPU on Linux, you have to, once as root, start blender -> User Preferences -> System -> Cuda. Quit blender, and then start as regular user, and do the same. Then select Cycles renderer, and under Render properties, Device: GPU Compute.

By default, Blender add ambient light. Why would you if you do Path Tracing? So disable it with: Properties World -> Surface Color black.

When importing let's say Wave front OBJ, the colour space is presumed linear, for vertex colours. This typically is not the case in OBJ files, so you need to fix those. Use this script. Extract the .py file and paste that in a text panel, then run the script.