After a successful exploration of unity earlier, I though I would test-drive Unreal Engine 4 to see what that is all about. Here are some random observations I made:

I'm on a mission to reduce my Android game's crashes as much as possible. And it turns out it is incredibly hard to approach a zero crash rate.

First off, I would like you to consider this: If 1% of today's users of your app experienced a crash today, is that bad?

Well, according to Google's metrics system, it gets labelled 'bad' as soon as you exceed 1.09% of users. Which is kind of a weirdly specific number. I don't know where that number comes from.

I love the Google Play Developer Console. It's so much better than any other developer console I've used. These include Valve, Apple and Amazon's developer sites. Google Play defines the crash rate as follows: Crash Rate: Percentage of daily sessions during which your users experienced at least one crash. A daily session refers to a day during which your app was used.

So here you can see how my quest for zero crashes is progressing. The trend looks good: 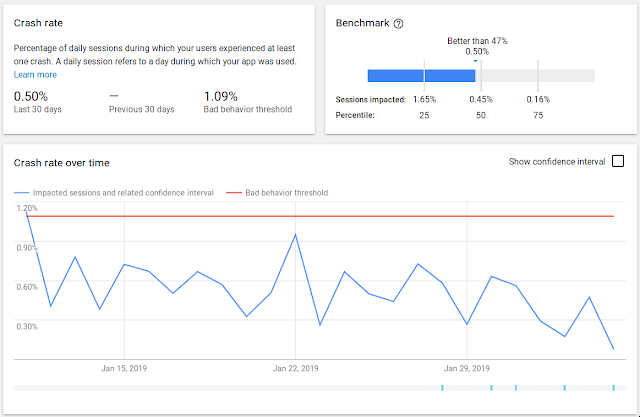 Now the "Benchmark" is interesting... they compare the crash rate of your app, to a game-category. And the Google Play Developer Console interface let's you change it to a different benchmark. By comparing my game to all the different benchmarks, I could do a comparative study of crash rates in different categories! With out further ado, here's how likely a game of a given genre is to crash:

One thing that stands out to me, is how high these levels are. Crashes in Android apps are actually quite common. If I had to guess, a lot of it could be attributed to fragmentation of the Android devices. So much diversity, and limited means of testing them. Although I have to give a shout-out to the incredibly useful "Pre Launch Reports" that Google offers. The team that does the Developer Console is one hell of a team.

Another source of frustration is the dubious quality of Android's frameworks. Especially the NDK native frameworks. If your app crashes beyond your control in a buggy In-App-Billing framework, or Google-Play-Games framework, there is little you can do.

Still, it is an interesting experiment to see how low I can get my crash rate. Stay tuned for updates on my progress towards my goal of zero crashes.