With the implementation of Practica Boxel I was able to verify that for simple (aab primitives) and small (200 blocks) scenes, you can compute indirect light at 60Hz. This is an encouraging result! (Notice the red glow in the room, as the light drops.)

But it does leave me wanting for more... how can I do large scenes? With conventional, direct illumination rendering, you always have the option to split up your world in chunks, and treat them separately. Could I do something similar for Practica Boxel? What if I create a 3x3 grid around my avatar, and only compute indirect light every frame for the center sector? And compute the indirect light of distant sectors sparingly?

And there we hit the first snag: just because a chunk is remote, does not mean it cannot influence indirect light of the center sector. At the very least, we need to consider remote light sources too. If a lightsource is considered at one chunk but not at the next, a division will clearly show up.

Ok, the good news is that with the Photon Mapping approach I use, the use of many lightsources is very cheap. I even added a mechanism to prioritize lightsources, so that more photons are shot from nearby ones.

But there is more to it. Distant geometry also influences the light, either as an occluder of light, or a reflector of light And especially in my implementation, the cost of extra geometry is large! I opted for a linear algorithm that tests all geometry against a photon's path. This eliminates the dynamic branching that a spatial subdivision algorithm would bring, so the CUDA code can blast through it at full speed. This is great for small scenes, not so great for large scenes.

Geometry just beyond a sector's reach will fail to exert its influence on the lighting of objects nearby. I was half-way hoping that the error would be small enough... light falls off with the square of the distance, so should quickly go to zero. In practice, the human eye is just too sensitive to small discontinuities in light. 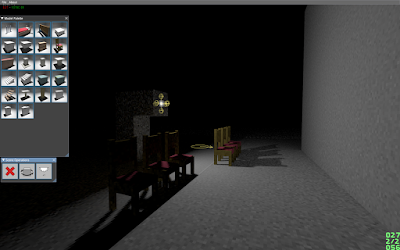 Six chairs. Spot the sector boundary! Only half of them receive light from the wall.

I guess one way around this, is to have two separate boundaries: the sector boundary itself, and a larger boundary that contains the geometry of influence. But no matter how you set the second one, there will be a distance that separates the inclusion and exclusion of an object, and it will show up.

The other approach would be to suck it up, and abandon real-time calculation of indirect light. Just photon-map the entire world as a whole. And no longer do immediate light calculation. The light would be static, or updated at 1Hz instead of 60Hz. But if it is static, why bother with all this, and not just use Blender or Maya to bake light maps?

Real Time Global Illumination seems so close, but... not quite in reach for complex scenes. To be continued.