In 2015, I released a successor to The Little Crane That Could on Steam for Windows, Linux, MacOS. 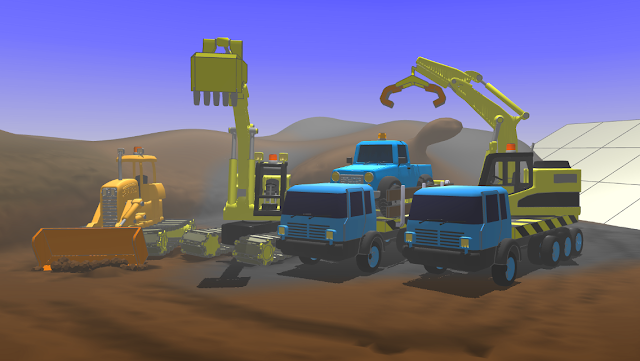 In the sequel, I wanted to do something special, and decided to make the terrain deformable. This means, you can dig into the terrain, anywhere, and deposit soil anywhere. And not just constrained to height-maps, but a real full 3D terrain that includes caves, overhangs, and such.

An ambitious undertaking, but I think it got there. Being on desktop, instead of mobile, meant that there was more CPU power available. The collision of all those dirt particles against a dynamic terrain is far from cheap.

After publishing the Windows/Linux/Mac versions, I decided to push the iOS hardware and see if the latest iOS devices were up to the task. To my surprise, iOS CPUs were surprisingly powerful, and able to pull it off (although often below 60fps, or even 30fps, but the 2015 devices were able to run it.)

Back then I also tried a quick Android port, but the average Android device was trailing so far behind Apple's performance (floating point calculations), that I could not publish it there. An Android tablet would just be bogged down, unable to compute the simulation at interactive rates.

Now, skip to 2019. Four years later, the Android devices are roughly where iOS devices were in 2015, when it comes to running my (OpenDE based) soil simulation. It is time to revisit the Android port!

For the Android port, I decided to do an experimental release. Since I can only afford to run on fast devices, I thought I would cut down massively on supported devices. For starters, 64 bit ARM only. And I will publish for Android version 9 and newer (which is just a 10% marketshare.) To top it off, only for devices with ES3.1 and higher.

One of the questions I want to answer with this experiment is how Google Play would treat such a title. Let's say Google Play decides to promote your title in the "Similar Titles" section on the store. And let's say, the Google Play store algorithm decides to grant you 1000 slots, or views. Will it simply drop 900 of those slots for customers on incompatible devices? Or will it keep trying to find customers with compatible devices to show your app to?

Or in short.... by reducing your compatibility to 10% of the devices, will you reduce the in-store visibility to 10% of its potential, as well? I honestly do not know. And I don't even know if I can reliably measure it? I guess compare store-stats with my other apps? Or after a while, add Android-8 support and see if store hits increase?

UPDATE: It has been released. But somehow, it is impossible to search for it? It will not even show up under the publisher page of Game Studio Abraham Stolk Inc. This is weird.