Just for the heck of it, I am test-driving a RISCV Linux SBC called the Sipeed Lychee RV 86.

When I plugged it in, nothing happened. No console ouput on the USB tty, nothing on the screen. It turns out there is no software loaded on it: the flash memory slot is empty. So you need to provide your own storage, and own OS.

First attempt is with a "debian-minimal" install.

Those were the write speeds to my "Sandisk Extreme PLUS." Hmm... that does not seem to be an extreme speed, to me. It has a U3 designation. Oh well. UPDATE: Lexar x1000 was even worse: 15.7 MB/s and the write speed slows down, as you write more. Remind me never to buy Lexar SD cards again.

And it works! With the card inserted, I now get a login prompt on ttyUSB0 in 32 seconds. Not bad at all. 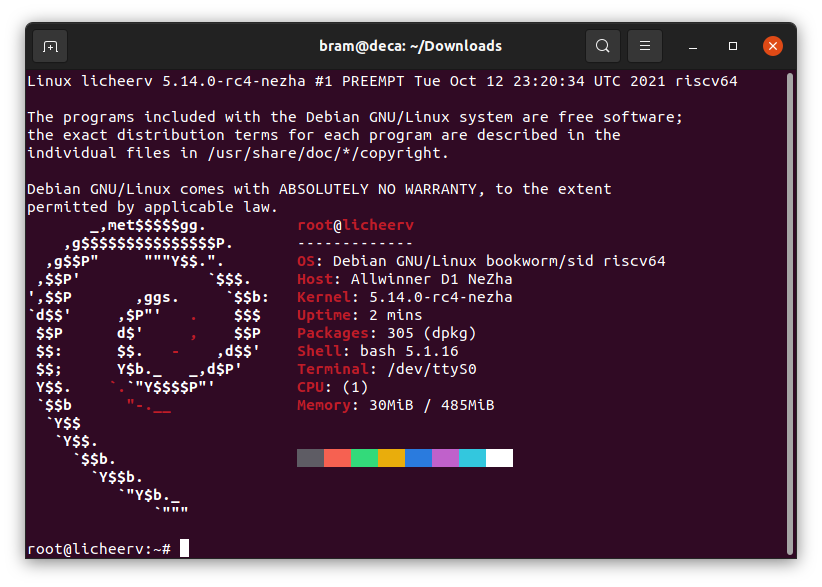 Somehow, it takes a long time for the Ethernet device to show up with ifconfig command? When it does, ifup usb0 is not working: ifup: unknown interface usb0

When I make usb0 interface known, the dhcp client will receive no offers, unfortunately. Despite the Ethernet light blinking, so there is network activity.

I have been able to work around the need for a proprietary MSWindows tool to use the Lichee RV disk images. With the OpenixCard tool, you can extract a normal image, that you can write with dd to an SDCARD.

The Debian image works great. I removed all X11 stuff, and will just use fb0.

I noticed that eth0 mac address is randomized at each boot, so I had to create an entry in /etc/network/if-pre-up file:

If not using wifi, it is probably a good idea to remove xr829 from /etc/modules file.

I have been removing a lot of packages, trying to get a minimal install. To aide this effort, I decided to graph the dependencies, to see which cuts I can make in the dependency chains.